I’m one of those people who is thrilled by horse racing. I know there are abuses; I know there are accidents, maimings, and fatalities of horse and human alike. I know there are cruelties and everyday examples of all the ruinous stupidity that money can bring and buy. I know that my own horse, a daughter of Xchanger –who led the Preakness field for the entire first half of the race in 2007 – ended up in a New Hampshire backyard emaciated, filthy, and forgotten. It is a capricious sport and like all sports it is a business. When animals are involved in a business, its ethics become all the more complicated.

When people see the pictures of Bizzy from the first day, they inevitably say, “You saved her.” That’s true – but not just because I wrote a check, cleaned her up, and fed her. I brought her to a barn where she is trained, worked and partnered with again. Where she’s respected for the athlete that she is.

Because we are starting her on a new career, Bizzy now has a good life –even a great life— especially for a Thoroughbred. She is not a pet or a lawn ornament. I believe her sweet and curious personality would turn to arrogance and depression and her strength would become unwieldy if her mind and body weren’t turned toward learning and working.

Racing gives us these intelligent, athletic, all-out Thoroughbreds. Good people give back to them through kindness, mutual hard work, and respect for all they are born to do.

Over the course of November through March, really through the winter, Lauren was working her at the walk and trot. By February, we started only walking her. She was so up every time, so over-responsive to every aid – especially contact – that it seemed the only thing to do was just to walk it out.

We lunged her, of course. Lauren rode her more and more, around the snowstorms and whenever she could. I rode whenever I could get down there. Bizzy stopped going into orbit the way she did in November and December every time Lauren put the leg on or gave a little bit of contact, but still she was spooky, tripping, looking for some little reason to scoot or jump. But still, it was all we could do to have a nice, contained, relaxed walk without someone holding her or walking alongside.

The idea was (and this is echoed in everything you read about bringing Thoroughbreds off the track): Let her walk and relax. Let her realize we’re not going to ask for a single other thing. Let her do this in the worst months for horses – the months when their backs are cold (hence all the bucking and broncing on the lunge, kicking out and stretching out that back), the months when some horses are nervy anyway.

Along with lots and lots of scratches on the neck and praise, telling her she was a good, good girl.

We started with pony rides. You can tell from the expression on my face that it was a joy and a surprise to get on her back. She was so skinny and so wiggly, and it was just a thing to be up there. I think we only walked that day, with a very light contact as you can see. She had no muscles! Soon, when we would ask for a trot, she would do a little leap into it, and sometimes a crow hop.

Lauren started her on the lunge line, and started me lunging her, too. The first part was getting her to go out on the circle, and respond to voice commands to walk, trot, canter, whoa. She wasn’t strong yet, obviously, and her go-to was to do a downward transition as soon as she was tired. Not a bad trait for when we’re starting out – she didn’t, or couldn’t, just gallop and gallop.

She also needed to get the strength back to balance herself at the canter on a circle — this was easier going to the left, as it is for most racehorses. They race to the left, and there’s not necessarily a lot of training to get them to do much of anything else. What we want as Hunter/Jumper riders is a more refined set of capabilities – we want brakes but we also want balance and grace at the walk, trot, and canter. By the time of this video – taken about two weeks after we got her – she was just starting to get the hang of things.

(For some reason this video looks upside down, but it plays right side up.)

After we gave her her first bath, we took her to the ring so she could see where we’d be spending our time. 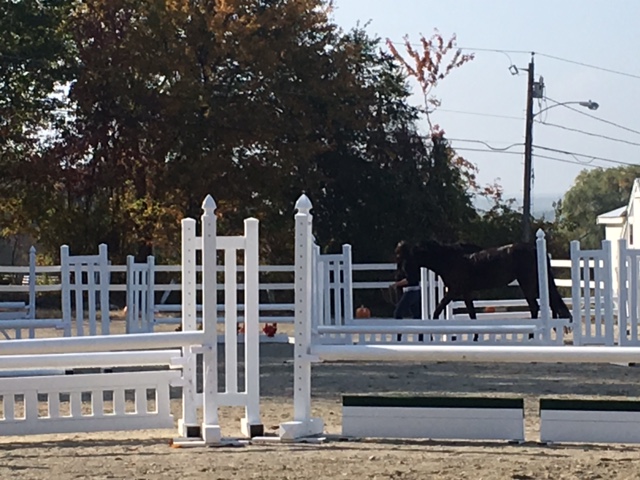 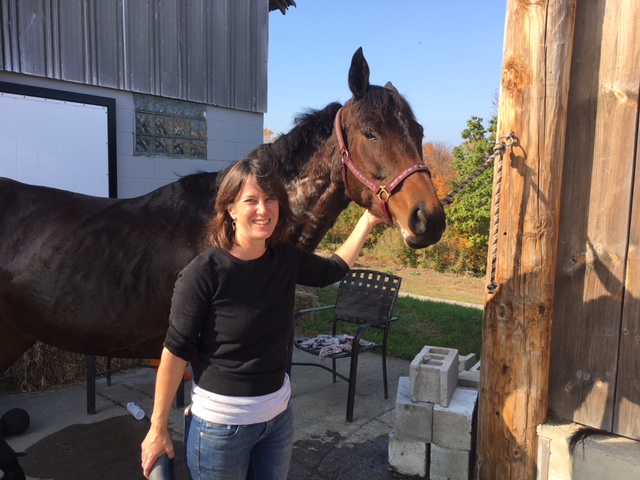 First order of business, besides feeding her and getting her checked by the vet, was cleaning her up. The first time I took her out to groom I was nervous – would she kick or bite? Was she sensitive to the touch? But like many Thoroughbreds she was used to being handled — and she seems to love being groomed.

It took three days to get much of the dirt out of her coat, and even then I wasn’t finished. But there was a horse under there, and a brown bay coat began to reveal itself as a reddish mahogany color, even if her fur was shaggy and her hips jutted out.

I had to go to the tack store with a list, too, of everything she needed. Heavy, medium, and light blankets. A “cooler” – a fleece for right after a workout on a cool day. Bridle and bit, saddle pads, groom box and grooming tools, fly spray, mane and tail detangler. Fortunately, I already had my saddle, which, even used, had cost more than she did.

A few hundred dollars later, plus anticipating the visits from the vet and the farrier, I called Kevin who was back at work in Washington, D.C., where he was commuting to at the time.

As a friend said, “It happens.”

The first day of training means not doing anything, just letting the horse rest in her new environment. If OTTBs are coming right off the track, it’s especially important to give them some time to wind down after that busy life. In Bizzy’s case, she’d been off the track for two years, because the racetrack where she worked, Suffolk Downs, was closing. Though there were still a few race days a year — six spread out over three months rather than a ninety day meet — her trainer didn’t have the means to bring her horses back and forth. So she’d brought them home to New Hampshire, with no income for them anymore, and had begun to sell them off.

Bizzy was the only one who was so thin. We never could figure out why, exactly. We dewormed her right away, got her tested and treated for Lyme, and just fed her – and fed her, and fed her. We gave her a salt lick and plenty of water, and let her settle into a new routine of stall time, turnout, and handling – starting with grooming.

Lauren texted me that morning when she turned her out and said, “She just did a quiet canter across the field.” It was significant because it was probably the first time she had cantered in two years – as we’d seen, she hadn’t really even had the room to trot.

When we stopped for gas, I hopped out of the truck and peeked into the trailer from the back. Bizzy – the horse I had just bought and named – was still eating. In the dim light of dusk, I couldn’t see the filth or the ribs and hips sticking out. All I could see was the outline of a Thoroughbred – and she belonged to me.

The day after Kevin and I went to visit the horse – in October, 2016 – Lauren and Amanda drove the truck and trailer up from Uxbridge while I drove from our home in Arlington. We met up in the Friendly’s parking lot and I hopped in with them. Lauren had brought her one year old baby, Elizabeth, and was pregnant with her second.

When we arrived, the first half hour was filled with pushing the dogs back, ignoring the woman’s protestations about getting the horse out of the paddock if we weren’t definitely going to take her, Lauren threatening to walk away if we couldn’t see her move, my ducking out before getting kicked by one of the other horses and finally, at last, leading the horse into a trot down the driveway. She trotted just fine. She was sound.

Lauren and I had a quick consultation. The horse would need extra board, she was so extremely thin.

I agreed, not even really knowing what I was saying, and asked the woman for the horse’s papers.

I told her I thought that she could, if she just went in the house and looked for them. I don’t know what possessed me to say that, but it worked. Two minutes later, she’d produced them, protesting that she didn’t want us to have them because she didn’t want us to race her again. We compared the registration number to the tattoo inside the horse’s lip. I wrote the second check for $250. And then she was mine.

We walked her down the driveway. At the end of it she suddenly stopped, slammed a front hoof on the pavement, threw her head in the air and screamed. I thought it meant we were going to have an awful time loading her. But once that was done she threw her head back down, walked right on to the trailer, and began eating the hay hanging inside.

She’s never screamed since, so now I know she was saying goodbye. Or perhaps something a little less polite.

The woman began to get sentimental, calling her “Stella” and telling her she had always planned to do right by her. At last we said goodbye and I climbed up into the back seat of the truck – exhilarated, stunned, overwhelmed.

Amanda said, “Nicole, you own a horse!” and tossed me some mini Milky Ways, in the truck for Halloween. I ate three in quick succession and told them what I wanted to name her.

“Her registered name is She’s Just Business,” I said. “So I thought we could call her Bizzy.”

This is Goldie, the horse I leased for two years. 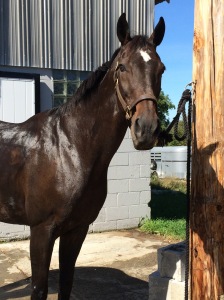 Goldie is Lauren’s pride and joy, an OTTB she adopted at ten years old and retrained for Hunters. A month before we found Bizzy, I was quietly absorbed in grooming Goldie for a show the next day. It was the hot beginning of September, and Lauren and I had been looking for a horse for me to buy. Because cost was an issue we had been checking out free lease options. But the woman with warmbloods to free lease never came through. The camp horse named Blueberry decided, on my second visit to him in Maine, to grab the bit and run away with me after jumps. And when we went to see a Paint who loved to jump, we were instead shown a huge, green draft named Rosie, trained by a woman who liked to somersault off her back.

While I stood there grooming Goldie, I thought, “Why don’t we just make me another Goldie?” Lauren made the same suggestion from the ground while I was mounted and about to go into the ring at the show the very next day.

She found the ad on CANTER and again on a Facebook feed for Horses for Sale in New England under $2000. There was a picture of a sleek horse, with the note “in race condition.”

And, the fact is, we love Thoroughbreds. 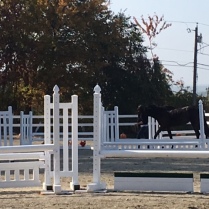